I have found Winnie the Pooh in Hebrew and now I can die happy.

The last few days have been משוגים! I had a really full, fun weekend.

Last Thursday after Ulpan, about 12 people left Be’er Sheva for the Jerusalem Beerfest. While intercity buses, run by MetroDan, are the equivalent of only a little over a dollar to ride (whaaat?), cross-Israel Eg’ed buses are similar to MegaBus/Greyhound; at $7.50 for an hour and a half ride to Jerusalem, the price is right.

Israel holds approximately 3 places of the 5 most beautiful views I’ve seen so far in my tiny life, and one of them is the winding path up the Judean Hills surrounding Jerusalem with a view of all the white houses cluttered and tucked into the ridges.

I am definitely cheating with this picture from 2010.

Segway in Jerusalem. I miss you, Justin and Steph.

When we arrived, we checked into Avraham Hostels. This was my first time ever being in a hostel, and I’m a little embarrassed to admit that there was an (albeit subtle) icky feeling in my stomach thinking about it because of the horror movie, which I’ve never even seen. Although we only stayed a night, it was really clean and had lots of fun tours and activities. Light rail runs on the street, and if you walk along the main road you get to the major attraction among tourists and locals both (and for good reason): Machane Yehuda Shuk.

It’s difficult for me to express how I feel about shuks (open outdoor markets). Basically, I love them. It takes about five minutes for you to get over the gurgling feeling at your stomach at all the flies buzzing around, but then you see the extent and variety of the merchandise, all the beautiful colors, freshness and low prices. It is nothing like a Union Square Farmer’s Market. It is loud and obnoxious and sweaty, crowded and claustrophobic and absolutely glorious. Pictures will help:

All different types of olive oil.

Pineapples (אננס, ananas) are so small and cute!

We both hung around a little bit the night of Beerfest and then had a cultural/culinary tour on Friday morning. For dinner, Clarissa, Doug and I ate at אמא (Ema, meaning mother, a name that I assume refers to the home-cooked feel), a small מסעדה (restaurant) in the market that sold a food that I have never heard of before, have had nothing like before and am utterly unable to describe, except to say that it was delicious… This ain’t yo momma’s matzoh balls. (Well, really, it’s Kuba.) 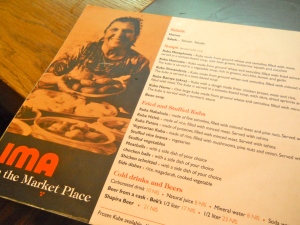 On our culinary tour, we explored the history of the market niches and of some of the small neighborhoods that compose Jerusalem. In the shuk, there is the the “touristy,” bright, colorful and variegated section; if you walk a little further you see a less bustling, less colorful in an anxious-to-please-way section where the, how you say, authentic Israelis shop. As our BGU Anthro prof explained to us, these sections of the market do not interact for a reason; in fact, many Orthodox neighborhoods (despite living right across the street from the market) are constantly protesting it because of immodest displays such as jazz shows (lol). There is also an Afghani section and a smaller, budding Ethiopian section which expands with the culinary customs of the new immigrants. We talked about the cultural “hummus” wars between Israel and Lebanon/Jordan (here’s a short summary: http://nymag.com/news/intelligencer/hummus-boycott-2012-4/). In the area directly surrounding the market, there are both ultra-Orthodox neighborhoods and less religious, up-and-coming gentrified neighborhoods (kind of like Williamsburg!), all with their unique relationships to the market.

This scene is so odd and yet so perfect. 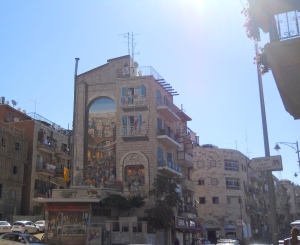 mural of the market

The Judean Hills Have Eyes?

The Beerfest was unfortunately not as hoppin’ as I would have liked, but I did have a good time. Gotta be real and say that Israel does not have the greatest beers (although there will be a local Beersheba Wine Fest next week that I’m excited about! Kosher wine yay!) (also I have tried this Belgium one, Leffe, that is incredible), but some were pretty rad. Among them:

Without a doubt, Isra-Ale “Chutzpah” was the best of what I tried. The name don’t lie. 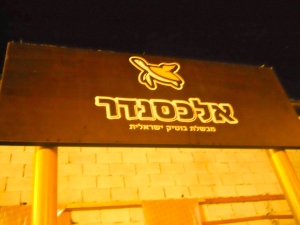 Afterwards at around 11pm, Ilana, Doug and I went to the Kotel (The Western Wall). It was an interesting experience at night, all lit up and with a lot more people than I expected. I had no idea that people go all night to see and cry and pray and touch the wall. I regret to say that I had we had a horrific time attempting to go through all the winding streets to get there in the first place. However, the quiet of the location did inspire me to think a bit about what it means for me to be a secular Jew in Israel. Next time I go, I might write a bit of a political commentary about it on here; don’t have the motivation for it in me right now.

Clarissa, Doug, Ilana and me at the festival

But in fact, I really find something to identify with in Jerusalem. It’s possible it has to do with the warmth that I feel emanating from the familiarity of Judaism and Jewish customs, but it’s less religious than something a bit more unconventional. Religious people here are not necessarily quiet or outwardly pious on the streets- like the market, they are loud and forceful and pushy and want the best price. I think this aspect of it, the hustle and bustle and close-togetherness of people and shops reminds me of NYC, and it feels a little bit more like home (though this is clearly a stretch of a comparison). Interestingly, I think both Israelis and New Yorkers can come off as being rude in ways, but for different reasons. New Yorkers because they legitimately want space and though they’re used to crowding are uncomfortable with the more intimate aspect of proximity with strangers, and Israelis because they are used to crowding but are all too eager to get into your space and close the gap between being strangers and acquaintances or even friends. This does not stop them from being intimidating, though.

At the market, I bought re:bar (Israeli goat-milk yogurt parfait/shake brand) and then olives and whole-wheat challah the next day to bring to Shabbat dinner at Steph’s aunt Michal and uncle Tibi’s apartment in רחובות (Rechovot, meaning “streets”). Both were DELICIOUS. I sometimes forget how much I love olives. Stephanie, if I could transport them telepathically, I would.

I bought from an amazing challot store called Marzipan.

My weekend in Rechovot was amazing. Back in 2010, Justin, Steph and I extended our Birthright stay for a week to stay with Steph’s family. Being back felt like walking into a dream; it’s such a great feeling to know that you are always welcome somewhere safe and comfortable, especially when you’re far from home. Michal, as always, stuffed me to the brim. I spent two days talking almost entirely in Hebrew with 4-year old Danielle, playing Monopol, doing puzzles, drawing pictures of zebraot, and being chastised: “Amarti lach!” (with all the force of “I already told you”) when I asked her to repeat the word “elephant.” So cute. On the positive side, listening to a family speak Hebrew and attempting to break into the conversation myself helps me pick up subtle, invaluable patterns necessary to learn.

Michal made me this amazing jumble (Salad for breakfast, something I would only do in Israel) to take back with me to Be’er Sheva:

On the train back at 7am Sunday eating my ירקות (yerakot, veggies), I had that feeling like sometimes when you’re eating and you think you’re chewing too loudly because you can only hear the sounds in your head…on a bus full of sleeping soldiers, that got kind of awkward.

Meanwhile, back in Be’er Sheva… A place I’m really looking forward to spending more time is this little corner café called Ashan Hazman (עשן הזמן) or what I think means “Smoke of the Time.” It has live music shows at night that I want to catch and its shelves are lined with books. I started reading Milan Kundera’s The Joke last week; I gotta resolve to go back and finish it!

The best way to learn Hebrew 😉

I almost peed myself when I saw Handmaid’s Tale.

Famous Glida Be’er Sheva ice cream. “American ice cream with the taste of Be’er Sheva.” I’ll get back to you when I know what this means. 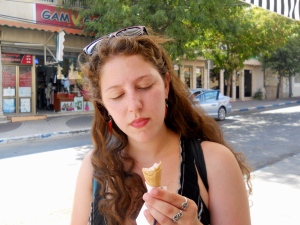 This is an photo of me looking unintentionally contemplative while wondering why my rosemary-flavored ice cream went away so fast.

Conclusion: after getting another taste (literally) of Jerusalem, I’ll definitely be going back many a time. Biblical Zoo whatup! 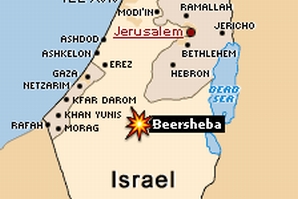